KIRKLAND, Wash. – Decemeber 19, 2022 – Drivers are set to make an estimated 19.6m separate trips by car to see friends and family between today and Christmas Eve, with 40% of all getaway journeys crammed into just two days, according to new predictions by the RAC and INRIX.1

Leisure traffic is expected to build steadily through the course of the week, peaking on both ‘frantic’ Friday 23rd and Saturday 24th December with a predicted 7.9m getaways over the two days expected to be made.

Christmas Eve sees a largescale walkout from rail workers which the RAC is warning will only lead to yet more traffic on the roads that evening.

And, with drivers getting away for Christmas vying for road space with commuters and everyday motorists, total traffic volumes are likely to be far greater causing jams in and around cities and at key pinch-points on major roads.

Christmas Day itself is also expected to see a lot of people on the move, with an estimated 3.6m leisure journeys by car taken, with a further 3.3m on Boxing Day and an extra 1.4m trips across both days – but with no commuter traffic on the roads, overall traffic volumes should be lower, meaning serious delays are less likely.

Transport analytics specialists INRIX expects travel times to be around 14% longer compared to the same period last year with stretches of the M25, M60 near Manchester, M6 in the north-west and M40 in Oxfordshire seeing some of the longest jams.

However, it only takes a single breakdown on a major road for tailbacks to form quickly, so the advice from both the RAC and INRIX is for drivers to check their vehicles are ready for the road and plan ahead to avoid the worst of the jams.

“By Friday, we fear it will be a case of ‘jams today and jams tomorrow’ on the roads as millions of people jump behind the wheel to see family and friends – with last-minute Christmas shoppers as well as the impact of another rail strike also leading to an increase in traffic.

“If possible, drivers should try to make their trips on a quieter day earlier this week if they possibly can.

“One saving grace for drivers might be that much of the country will see milder weather conditions this week with a much smaller chance of snow and ice like we saw just a week ago. Nonetheless, it’s still vital drivers do everything they can to avoid their cars letting them down.

“Checking oil and coolant when the engine is cold are two simple things that can cut the chances of a serious breakdown, as is ensuring tyres have plenty of grip and are inflated properly. Topping up with a good quality screenwash that protects to well below zero degrees is also important as gritted roads create a constant need for clearing the windscreen.”

INRIX transportation analyst Bob Pishue said: “With pre-pandemic levels of travellers hitting the road this holiday, drivers must be prepared for delays – especially in and around major cities. Our data shows, and our advice is, to avoid travelling during peak commuting hours this week. If schedules allow, leave bright and early or following the end of the afternoon commute.” 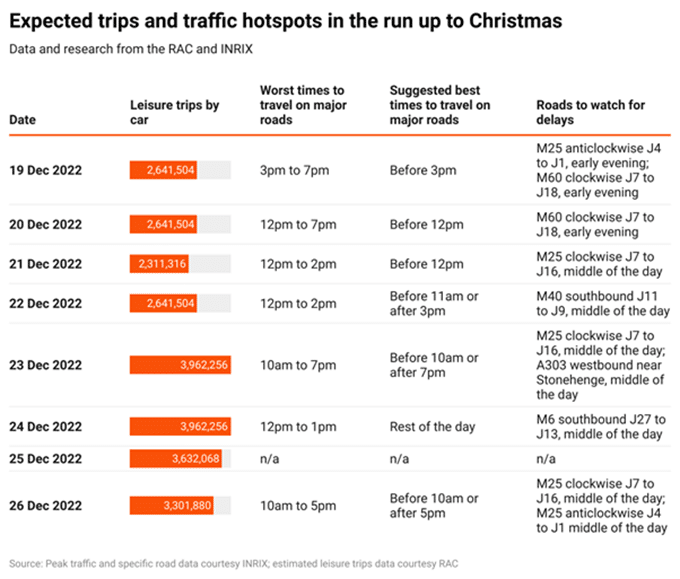 National Highways customer service director Andrew Butterfield said: “We don’t want roadworks to spoil Christmas, so we’re doing everything we can to make journeys as smooth as possible; that’s why we’re keeping almost 98% of the road network we manage free from roadworks.

“We know from experience that peak travel times can vary in the run-up to Christmas, so we’re encouraging drivers to check conditions before heading out to help keep traffic flowing. And we’re also asking motorists to be prepared before setting off. Almost half of breakdowns can be easily avoided if motorists carry out simple vehicle checks before their journeys.”

2022 Global Traffic Scorecard: Congestion is Up Despite High Oil Prices

Today, we released the 2022 Global Traffic Scorecard, highlighting traffic conditions in more than 1,000 cities in 50 countries. We...

INRIX Signal Analytics – A look back at 2022

Guest Post by Steve Remias, Head of Product Strategy, Signal Analytics at INRIX   As we close out another year,...

Guest Post by Phil DeFrancesco, Head of Product – Financial Services, INRIX As the former Head of Trading for one...