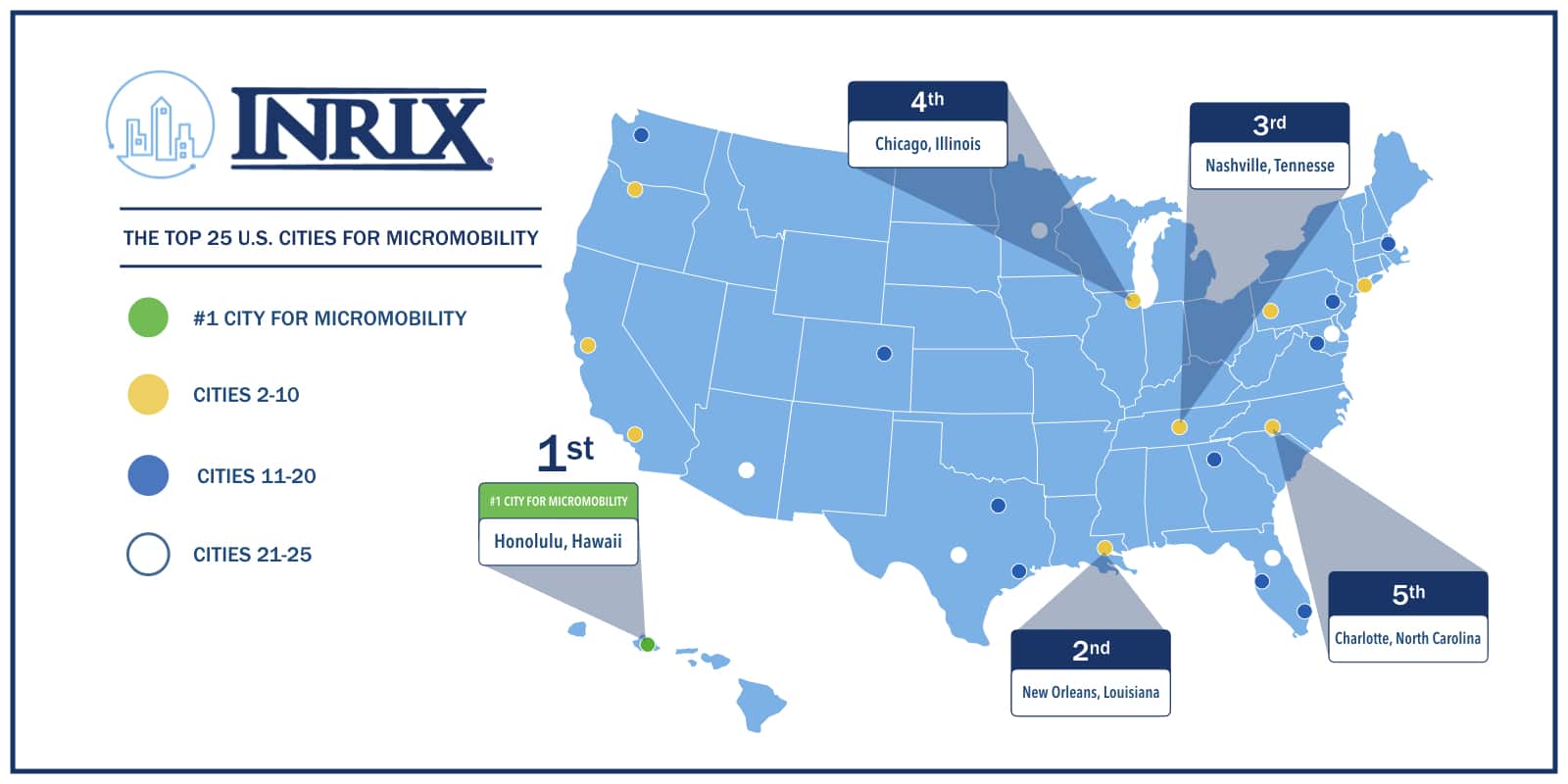 KIRKLAND, Wash. – September 9, 2019 – Micromobility (defined as shared bikes, e-bikes and e-scooters) has the potential to deliver substantial benefits to consumers and businesses around the world, including efficient and cost-effective travel, reduced traffic congestion, decreased emissions and a boost to the local economy.

According to the National Association of City Transportation Officials’ trip distance estimates, scooters are frequently used for trips between a half-mile and a mile, whereas bike distances are typically between one mile and three miles. Analyzing more than 50 million anonymous car trips, INRIX Research found that 48% of all car trips in the most congested U.S. metro areas are less than three miles (20% > 1 mile, 16% 1-2 miles and 12% 2-3 miles).[1] If a fraction of these vehicle trips were replaced with scooter and bike trips, American cities could reap significant benefits.

Analyzing trillions of anonymous data points from hundreds of millions of connected devices, INRIX ranked the top American, British and German cities where micromobility services have the most potential to reduce vehicle trips.

Honolulu, Hawaii; New Orleans, Louisiana; and Nashville, Tennessee comprise the Top 3 cities with the greatest profile for micromobility to succeed and reduce vehicle trips. These cities also feature warm climates with minimal topographic variation, providing further support for micromobility. The high proportion of short-distance trips – independent of a city’s density or public transit network – highlights the universal potential for shared scooters and bikes. While automobile-centric sunbelt cities like Dallas (ranked 19th) and Phoenix (ranked 23rd) have a lower proportion of 0-1 mile trips (18% and 17%, respectively) compared to denser cities such as Chicago or New York (both 22%), the small variation across all metros indicates the universal suitability for micromobility services.


To demonstrate a city’s potential benefit for shared micromobility, INRIX analyzed and constructed heat maps to score and visualize results for New York City. Additional city analyses for Los Angeles, London and Munich are available in the full report: https://www2.inrix.com/micromobility-study-2019

The highest number of short-distance trips in Manhattan occur in Midtown and the Upper East Side (concentration of dark blue Census Blocks in Figure 2). While Manhattan has the highest transit coverage of any major American city, the Upper East Side is less accessible than the Upper West Side, which corresponds to greater proportion of short-distance trips. Similar to Los Angeles’ Purple Line Extension, New York City has pursued rail expansion to address low transit accessibility via the 2nd Avenue Subway Extension, with its first phase opening in 2017 and proposed second phase expansion to 125th St. Micromobility-as-a-service could provide a valuable alternative to driving in lower transit service areas and increase the catchment area for existing stations.

With congestion tolling and the expansion of protected bike lanes in New York City, shared micromobility services could safely provide critical first- and last-mile connections to neighborhoods throughout the city.

Micromobility faces a promising future by replacing short distance vehicle trips and providing currently underserved first- and last-mile solutions for public transit riders. The ultimate success of these new modes will be predicated on two key steps: cities having a clear understanding of where micromobility is best positioned to offset vehicle travel; and cities having the necessary tools to engage with and manage these services. Leveraging trip data and insights can provide a foundational view of how people move through a city’s road networks.

In July, INRIX expanded its Road Rules platform to include support for rules and regulations for on the road, at the curb, and on the sidewalk for micromobility offerings, including features like bike lanes and pick-up/drop-off areas for dockless scooters or bikes. By leveraging a common platform to manage diverse mobility modes, cities can ensure shared micromobility solves transportation problems and delivers on the promises of safety, efficiency and access.

INRIX is the global leader in connected car services and mobility analytics. We help cities and businesses use big data to identify and solve transportation problems, making the world safer, happier and greener. Our partners are automakers, governments, retailers, insurance agencies, advertisers and dozens of other industries that can benefit from understanding how people and vehicles move. Learn more at INRIX.com.

Climate change is accelerating the universal goal of drivers everywhere to reduce carbon emissions each year. How can intersection analytics...

Cars are complex – with more than 30,000 parts in a single-vehicle. Automakers often use a variety of suppliers when...

Big Data Use Cases: How To Use Big Data for Financial Services