In Washington County, Oregon, a problem was emerging along the 65th Avenue corridor off of Interstate 5 – major traffic congestion in the evening hours near Meridian Park Hospital. The issue had managed to avoid the notice of traffic engineers for Washington County, despite having observed the corridor through installed traffic cameras, but public feedback eventually tipped the agency off.

Washington County used INRIX Signal Analytics to corroborate the feedback from the public regarding the 65th Avenue corridor, and they conducted a thorough performance analysis of the intersections using probe vehicle data, which inspired an immediate signal retiming project.

Once the changes were implemented, Washington County observed a significant drop in control delay and split failure counts along the 65th Avenue corridor. Signal Analytics has helped the agency continue to identify issues across its network and address problems before they become major sources of public frustration. 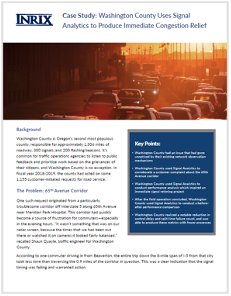 The Challenge: A study in 2019 conducted by the Pennsylvania Department of Transportation (PennDOT) concluded that 924 vehicle collisions could...

The Challenge: After COVID-related restrictions went into effect, the Virginia Department of Transportation noticed an unsettling increase (24%) in traffic...

The Challenge: The City of Austin has 1,000 signals which it reviews on a three-year rotation. Although considered a best...