2022 Global Traffic Scorecard: Congestion is Up Despite High Oil Prices 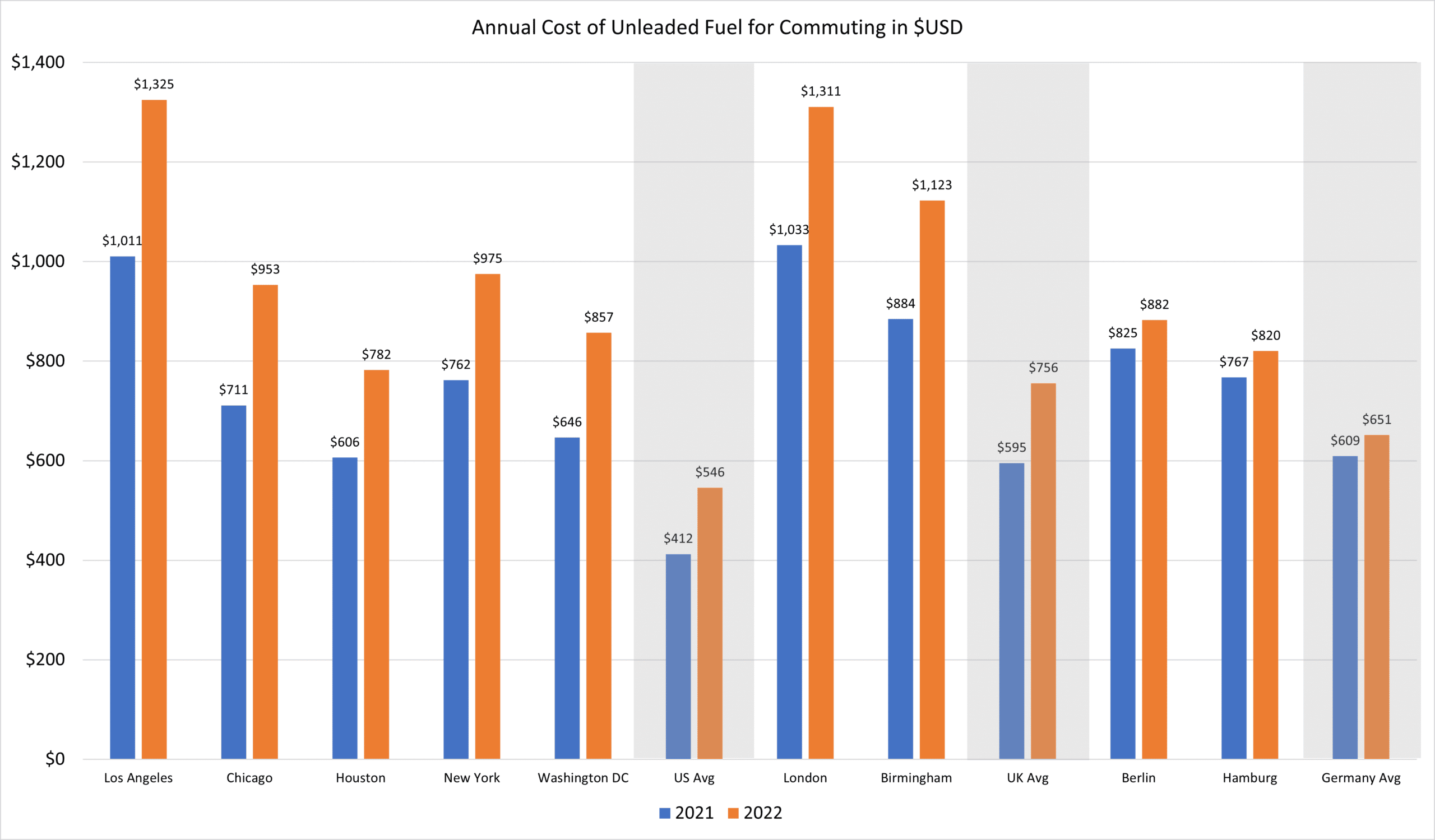 Today, we released the 2022 Global Traffic Scorecard, highlighting traffic conditions in more than 1,000 cities in 50 countries. We found that in most countries, 2022 was a year of relaxed COVID-19 restrictions, high fuel prices, inflation, and changes in commuting and telecommuting habits – resulting in a mix of factors that increased, and decreased, travel demand.

But oil prices were one of the top concerns of drivers, highlighted with near-daily media coverage of gas prices. US average national retail prices for regular gasoline according to the US Energy Information Administration began 2022 at $3.15 per gallon, rising to $4.84 per gallon in mid-June, falling to $2.97 by the end of December.

And prices at the pump varied by location. For example, in Los Angeles, the typical commuter spent about $1,325 for fuel last year, a $315 increase.[i] Drivers in Houston saw a smaller fuel cost increase of about $176 in 2022, while the typical driver across the United States paid about $134 more for regular gasoline.

When fuel cost is added to additional time lost behind the wheel, drivers in Chicago saw the greatest cost increase at $1,238 from year to year. In general, Germany saw the smallest increase in fuel prices due in large part to a temporary reduction in fuel taxes.

Initial signs show telecommuting, strong during the COVID-19 pandemic, has started to wane as employers and employees continued to work out working conditions and expectations. Between February and May 2022, the percentage of workers doing a hybrid schedule in the UK nearly doubled from 13% to 24%, while the share working only from home fell 36%.

In the US, office occupancy tracker Kastle Systems said that office occupancy was at 23% to start 2022, finishing the year at around 47% occupancy. In short, more people are commuting during the peak hours.

And Germany recently announced it expects road fatalities to increase nearly 9% in 2022 after hitting an all-time low in 2021.[ii]

2022 revealed that, by and large, motor fuel remains relatively inelastic, meaning a large change in price only corresponds to a small change in fuel consumed, and that upward pressure on travel like the return to work, activities, school, shopping, and freight demand overpowered the downward pressure of fuel prices. While downtowns still have room to recover in terms of re-emerging from COVID-19, 2023 should continue to see some moderate growth in congestion, absent large disruptions to the economy.

[i] Math result difference due to rounding. [ii] Fatality & serious injury numbers often lag by as much as a year, due to necessary follow up and investigation of cause
<< Return to articles
relevant posts/content