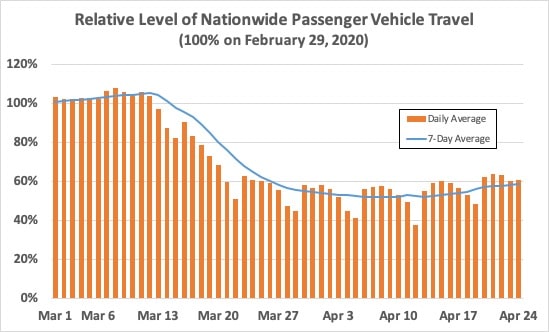 This is the sixth edition of a weekly review of changes in road traffic demand in the United States from the COVID-19 virus spread and our collective response.[1]  We will endeavor to publish this Synopsis every Monday for the foreseeable future, providing results through Friday of the previous week. For those interested in detailed information with daily updates, we have introduced the INRIX Traffic Volume Trends Dashboard.

It has been six full weeks since travel began its noticeable decline nationwide. Figure 1 shows the relative change in passenger vehicle travel from March 1, relative to the comparable day of the week during the control week of February 22 – 28, 2020. Figure 1 also includes a weekly rolling average.  Passenger travel is clearly trending upwards, down 41% on Friday, April 24th, compared to 46% the previous Friday and 48% on April 9th the low point to date. The rolling average was last at 41% on Friday, March 27th, four weeks ago.

State Level Passenger Travel increased in every state compared to last week. Rhode Island had the lowest increase (0.5%), Wyoming had the highest (16%). Seven states (Wyoming, South Dakota, Montana, Nebraska, Iowa, Minnesota, and Colorado) all saw week-ver-week increases of 10% or more. Figure 2 shows each state’s weekly rolling average on April 24th in blue and the maximum drop at any point from March 1st in orange. 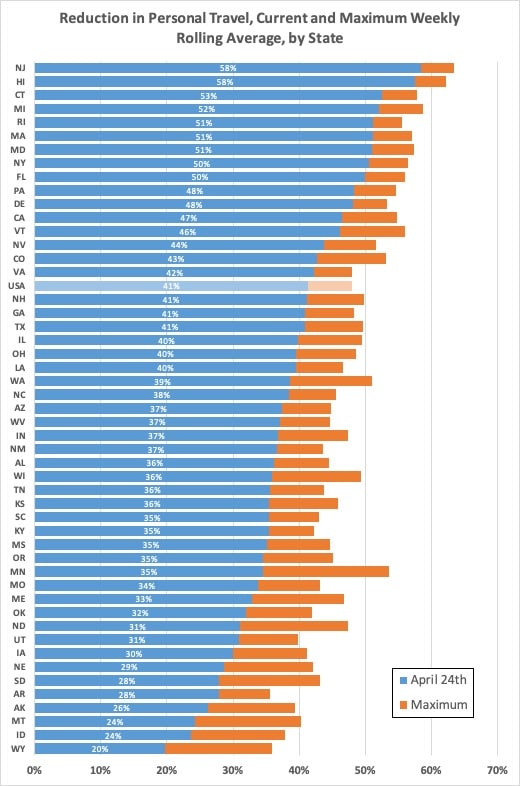 Nationwide Long Haul Truck travel reversed declines in Week 6, down 9%, compared to 13% last week. As highlighted in last week’s Synopsis, Easter weekend appeared impact Week 5, as the weekly average on April 24th was last recorded on April 10th, just prior to Easter weekend. All but two states increased truck travel from Week 5, and even those states (Kansas and New Hampshire) saw a drop of less than 1% week-over-week. Two states had week-over-week increases above 10%, Wyoming (13%) and Nebraska (12%).

Through Week 6, only Kansas is at its maximum reduction in truck travel, down 6%. 16 states have overall reductions in truck travel exceeding 10%, still led by Michigan (35%) and Texas (18%). Six states, led by Wyoming, have increased truck travel compared to the control week.

A reminder again this week on seasonal adjustments.  Ordinarily at this time of year, travel would be increasing significantly in the spring as compared to the winter months.[5]  Double digit increases in travel for April as compared to February would be expected. Obviously this is no ordinary year.