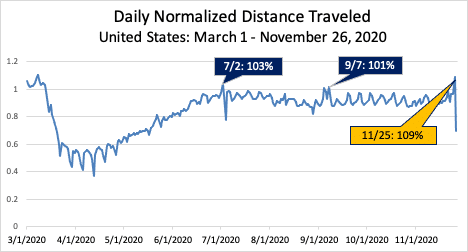 Travelers hit the road in record numbers the day before Thanksgiving, reaching a vehicle-miles traveled (VMT) of 9% above “normal” (pre-COVID) levels. To this point, VMT had only reached pre-COVID levels twice since the pandemic forced restrictions – both surrounding major holidays (4th of July and Labor Day). The third time, which happened on Wednesday, Nov. 25, topped the list.

The surge in travel comes at a time when many state and local government officials have reimposed restrictions, including asking people to stay home and limit Thanksgiving celebrations to their own immediate households. Many public officials have signaled their intent to impose further restrictions during the Christmas holiday season in attempt to stifle rising COVID-19 cases around the country.

While lockdowns affected each state differently, travel varied by state and region considerably, with states in the Southern United States seeing the largest surge in VMT.

To measure the change in VMT by state, INRIX compared Wednesday’s VMT to the average Wednesday in November. Maine had the lowest gain over the typical November Wednesday, 1%, while Utah had the highest at 34%. The median for all states was 15%. 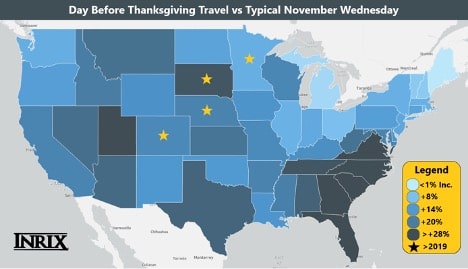 While travel surged in some states more than others, its important to see how this compares to last year. In that case, just six states, Alaska, Colorado, Hawaii, Minnesota, Nebraska and South Dakota had a larger percentage increase in Thanksgiving travel this year over last year. And out of those states, only South Dakota had double-digit travel increases last year over the average Wednesday.

Similar trends were seen at the city-level. Each of the 100 metro areas studied had more travel the Wednesday before Thanksgiving than it had for the average Wednesday, but 81 saw less of an increase in travel than seen last year. 19 saw a larger jump in travel this year vs last year.

The results reveal a mixed bag. One on hand, people traveled fewer miles this Thanksgiving than they did last year, indicating more people stayed at home for the holiday. And to add, Thanksgiving Day travel was just 70% of “normal” levels nationwide. However, compared to the last eight months, VMT did reach a high point like it did in past holidays.

INRIX will continue to monitor holiday travel as we approach the Christmas holiday season, where it is expected officials will try again to curtail gatherings in an attempt to keep COVID-19 cases and hospitalizations from rising.