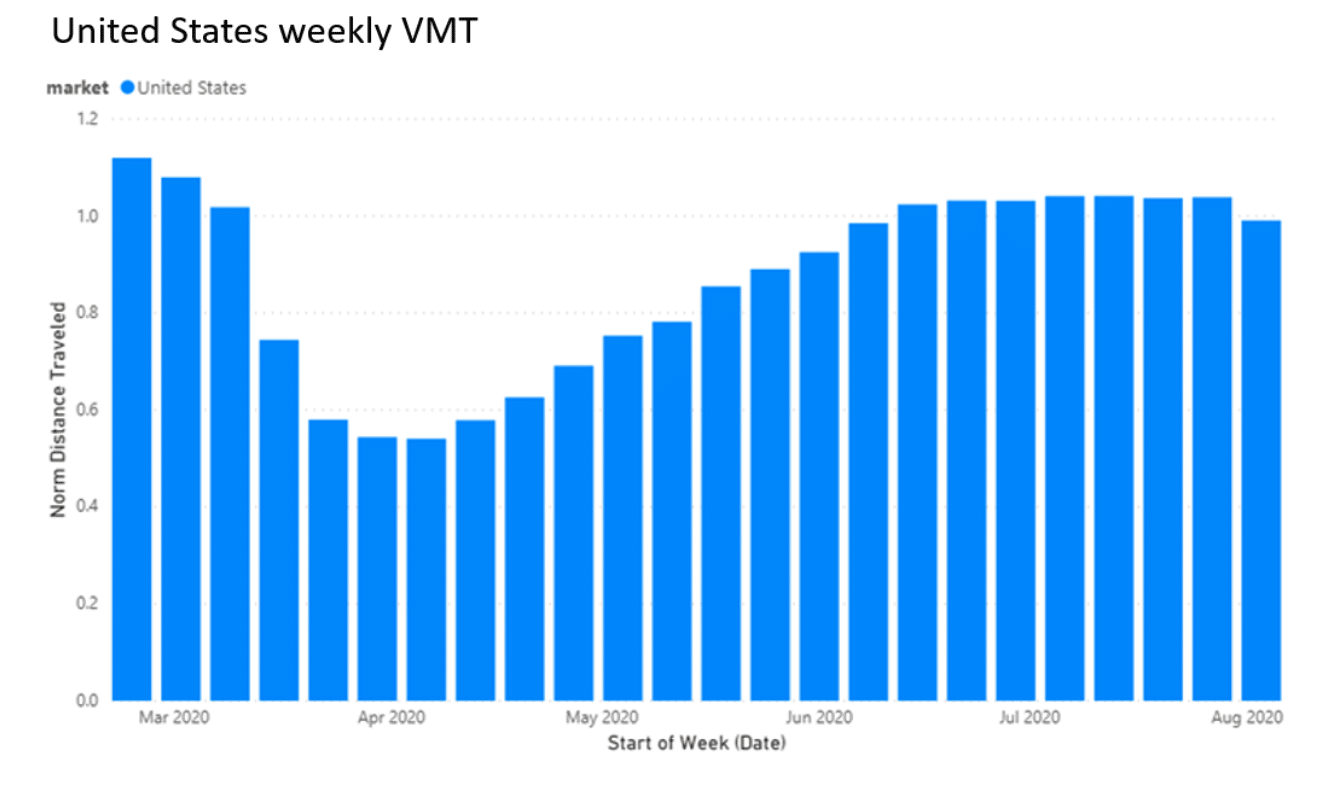 INRIX has reported that vehicle miles traveled (VMT) across the United States is returning to the levels last seen in February, before COVID-19. While some larger cities’ traffic has rebounded slower than others, many haven’t reached their normal, seasonally adjusted VMT. Nationally, the U.S. surpassed 100% of its normalized VMT the week of June 15th

A recent INRIX post reported on how vehicle speeds are returning to normal, although when people travel has shifted since COVID-19. In the table below, we compared monthly passenger VMT in the morning and afternoon peak periods in 26 large cities in the United States, then took a closer look travel patterns in a few cities.

In each of these Metropolitan Statistical Areas (MSAs), VMT and speeds have continued to increase over the past three months after hitting a low in April. Speed improvements reflect fewer vehicles on the road and their associated miles-traveled. However, VMT in a handful of cities started to decrease again in July. In the morning peak,  Tampa (<-1%), Dallas (-1%,) Austin (-2%), Houston, Miami, Phoenix (-3%), and San Antonio (-4%) all saw reductions in morning VMT. This indicates that the already light morning commute is backing away even further. In the evening peak time, VMT in Tampa and Dallas decreased about one percent, while Houston (-2%), Miami (-2%), San Antonio (3%), and Phoenix (-4%) continued a more rapid decline. All the other cities continued on an upward trajectory.

Miami (60% of normal) and San Francisco (62% of normal) have the lowest July morning peak VMT of the cities studied, and still have not come close to reaching normal pre-COVID levels. These two cities dipped below 40% at their lowest point in April and have barely increased above 60% in the last three months.

As these cities reevaluate decisions on how to best fight COVID-19, the amount and speed at which people drive will continue to change. The states that shut down again may decrease in VMT, while others that open could see an increase. INRIX is monitoring these changes, and will keep the blog updated.